M2 interview - Buffed Bren Esports is after the World Championship 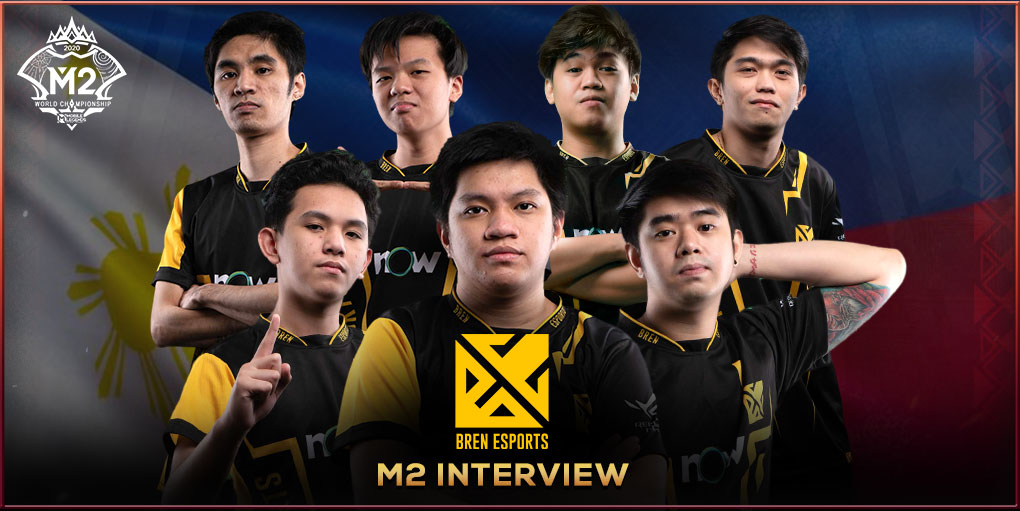 What are the differences competing in an offline event compared to an online event?

KarlTzy: Playing in an offline event increases the stakes because of the added pressure. But I'm used to it.

Ejhay: Offline is more exciting because you can see the fans supporting your team

Lusty: Offline tournament is good cause you can hear the crowd cheering the team they love

FlapTzy: The differences is that there are alot more pressure when playing in offline event than online

Coco.: Online is boring offline is more fun, meeting all the fans and other players

Pheww: It's more challenging because you will not be playing at your comfort room

What's your personal goal in M2?

KarlTzy: We want to win and make our country proud.

Ribo: To be champion

Ejhay: To be the world champion

Lusty: Being a champion because its my dream to play in M2

FlapTzy: My goal is to become the Champion of M2

Pheww: To play at grand finals

How do you prepare for M2?

KarlTzy: We are continuously improving our strategies and mastering our roles to their limits.

Ejhay: Scrimmage training to other teams

Lusty: Its same in playing mpl just practicing the hero and my mind andin long games

Pheww: We train 8hrs a day doing scrims with other teams

Which team do you want to fight against the most in M2?

Lusty: Alter Ego or RRQ that we can prove that we are the stronger team

What do you want to say to your fans?

KarlTzy: Thank you for always supporting me and my team. Please continue doing so because it means a lot to us.

Ejhay: Thank you guys for supporting bren esports! Philippines numbawan love you all

Lusty: Thank you for always supporting us and keep supporting my team. I love you all

FlapTzy: Keep on supporting bren and we will not let you down

Coco.: Thank you for always supporting us

Pheww: Thank you for always supporting us

What do you want to say to your families?

KarlTzy: Thank you for supporting me up to this point. I really hope I can make you even prouder.

Ribo: Take care and support me

Ejhay: Shoutout to my family to sambrano family

Lusty: Thankyou for supporting me even we lose they always there to support me

FlapTzy: Thanks for supporting me and i will do my best to win in this tournament

Coco.: Thankyou for the support and trust

Pheww: Thank you so much for supporting my passion

What do you want to say to your teammates?

KarlTzy: Let's show them what we can do and bring home the trophy.

FlapTzy: We will be champions

Coco.: Thankyou for giving me this opportunities

What does it mean to represent the Philippines at the world stage?

KarlTzy: It has been my dream to represent the PH in the world stage and not just in our region. Now that i'm here, I will do my best to win.

Ejhay: We will bring home the bacon!!!

FlapTzy: It means that we are the strongest in our country and we must prove that by winning the championship title

Pheww: It's exciting since its my first time to play at a world stage

The winning team will also receive its very own skin with its branding on an in-game hero of its choice, which hero would you pick if your team triumphs in M2?

Lusty: Grock, because its my favorite hero

If you could only visit a place in Singapore, what would it be?

Lusty: My mother place i want to see her

Coco.: Got a lot of places in mind, marina bay

Do you think ID teams are stronger? Why or why not?

KarlTzy: I feel that we are on the same level as ID teams

Lusty: Yes they strong , they have strong mentality and they love destroying the mind of the enemy team

FlapTzy: Yes, because they are hardworking people

Pheww: I think they are stronger since esports company are more established there and they value player and coaches more than here in PH

After a sweep lost against AE, what's your feelings and thoughts?

KarlTzy: I feel reinvigorated. I want to beat them, that's why I'm training to surpass my limits.

Lusty: For me i'm not ready to that tournament because the management give me a 1 month vacation and i never thought that i'm playing in mpli

Pheww: I just wanted to get even stronger

Do you think you can take the revenge since both teams are in the same M2 group C?

KarlTzy: We will do our best!

Lusty: For M2 i think we can revenge to them cause now im ready to play M2 and i practice a lot to destroy them

Pheww: I hope so, we will try our best

How do you recalibrate and bounce back from the MPLI lost?

KarlTzy: We regrouped and we discussed our mistakes not only in-game but also outside the game.

Ejhay: We will train much harder

Lusty: Practice and winning the scrims

FlapTzy: Learn from our mistakes

Coco.: Learn from the past

Pheww: We will prepare more and try different strategies

Have you come up with counter measures against ID players?

KarlTzy: Yes, go crazy and don't hold back against them.

Pheww: We will just play like them and make it better

What are your words to other group C teams (Alter Ego, 10second Gaming+)?

KarlTzy: Goodluck to all of us. Let us all have fun!

Ejhay: We can beat them

Lusty: Get ready we will destroy them

Pheww: Goodluck to all of us

My coaching style is lateral or democratic. I feel that I can squeeze my players' creativity if I don't impose heavy restrictions.

Who is the in-game MVP so far? Why?

Pheww. He has shown exponential improvements.

Who is the bootcamp MVP so far? Why?

Ejhay as he has been a really good source of morale for the entire team. Win or lose, he is there to boost the team mood.

Please describe your feelings and thoughts for M2?

I'm excited for sure. Can't wait to play.

What are the differences competing in an offline event compared to an online event?

I feel the core difference is the added stage pressure. Some players can't handle stage fright.

What's your personal goal in M2?

How do you prepare for M2?

Train as calmly as we can.

What do you want to say to your fans?

If I ever have fans out there, thank you so much for believing in us. I hope we can make you guys proud.

What do you want to say to your families?

Hi mom, I'm in Singapore! Don't look for me.

What do you want to say to your players?

What's the team goal in M2?

Win the entire thing and bring home the trophy!

What does it mean to represent the Philippines at the world stage?

It has been my goal to represent the PH in the world stage and win the trophy for the country.

The winning team will also receive its very own skin with its branding on an in-game hero of its choice, which hero would you pick if your team triumphs in M2?

What's your plan during the quarantine in Singapore?

Train with the boys in preparation for M2.

If you could only visit a place in Singapore, what would it be?

There's this bookstore in Singapore I really want to visit, it's called Books Actually.

Do you think ID teams are stronger? Why or why not?

We are probably on the same level with Indonesian teams.

Do you think your team can take the revenge since both teams are in the same M2 group C?

We have a really good chance for revenge

Have you come up with counter measures against ID teams, METAs and strategies?

We are playing the same METAs as most ID teams, so I think improving our own strategies is the best bet we have.

How do you motivate players to better prepare for M2?

What are your words to other group C teams (Alter Ego, 10second Gaming+)?

Goodluck to all of us.